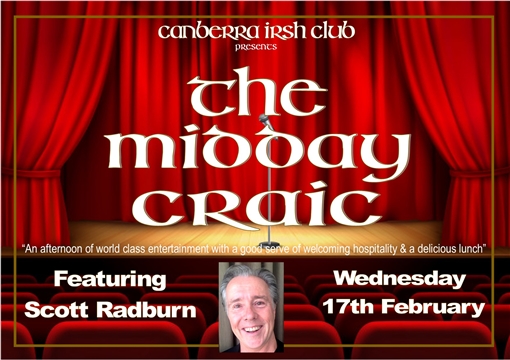 Who can sound like Robbie Williams,Pavarotti,Anthony Warlow,Elton John and Tom Jones when he sings?Who can have you in fits of laughter one minute then with an emotional tear in your eye the next?....are you ready.... it's the funny bloke "Scott Radburn" from Australia's most awarded variety show entertainers "The Four Kinsmen!" here for you in person to enjoy and experience his unique solo show.

Tickets $35 per person at

Scott Radburn (performer/producer/singer) is probably most recognisable as a member of the highly successful and popular Australian variety group "The Four Kinsmen" .

The Four Kinsmen have won a record 27 MO Awards and were inducted into both the Australian MO and ACE Award Halls of Fame for excellence in the field of entertainment. Apart from performing throughout the United States, their proudest achievement is having had their own show on the prestigious Las Vegas Strip.

Scott's solo career has been diverse from co-hosting Radio Wave FM's Breakfast Show, to playing a lead role in the world tour of the musical "Cats"in South Korea,playing and fooling the audience that he is a hypnotist from Prague in the show "Hypnotwist"(recently performed at the Don Bradman Gala Dinner at the SCG and in Singapore). The past 7 years has taken him to India,Vietnam, Bangkok,Phuket, Tokyo, New Zealand,Hong Kong (Macau),Shanghai ,Kuala Lumpur and Singapore to sing opera with the internationally acclaimed humorous corporate shows " The Three Waiters"and "Tenors Undercover". Scott recently appeared on TV's Celebrity Apprentice as a secret weapon against David Hasselhoff's team.

Scott's other career highlights are :Backing singer on Michael Crawford's and Helmut Lotti's Australian Tours, performing for the World Leaders at APEC, performing with Prince Edward and being a special guest  (entertainer in Tenors Undercover Show) at the dinner table of The Rupert Murdoch Family. His various movie and national TV commercial appearances include the movie "Rebel" (starring Matt Dillon) ,the TV movie "The Girl From Moonooloo" (starring Jackie Weaver) and the ANZ "Hey Jack" TV commercial etc. He is in constant demand for as a producer of corporate events.

In January 2016 Scott played the lead role of "Max" in the So Popera season of Mel Brooks hit musical "The Producers" at the Illawarra Performing Arts Centre ,"Belles" dad "Maurice" in Beauty and The Beast(2017), Billy Flynn (Chicago) 2017.

Scott sung solo for a private party of twelve Feb 2019 with Prime Minister Scott Morrison as the special guest!Recently Scott was given the honour by the Lord Mayor of Wollongong as being the Wollongong Australia Day Ambassador of the Year!